Stream Music From Your PC To Wherever You Are?

Stream Music From Your PC To Wherever You Are? 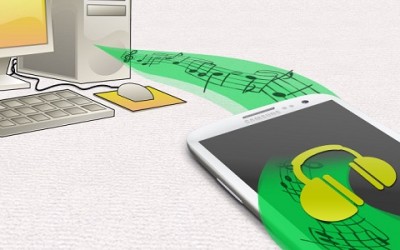 What’s the easiest way to take your entire music library with you, no matter where you go? Google Play Music, of course. But what if you don’t want to use the cloud? Well, you could also stream directly from your PC to your phone. It’s trickier to set up than Google Play Music and may involve tweaking your router’s settings, but it’s far from rocket science.

Music streaming has been around for quite a while. You’ve got Pandora, Songza (our review), and Jango (our review), all of which can stream music for free in an Internet radio format. Or you can use Spotify (our review) or Rdio (our review) to stream music on-demand to your Android. Then you’ve got Google Play Music and Amazon MP3, which allow you to store music on the cloud and stream it from there.

But what if you want a direct stream from your PC to your Android, no clouds involved? That’s when the following apps really shine.

Note: If you’re behind a router and you want to stream music from your PC, you’ll need to know your external IP address and how to forward your ports. Since different routers have different forwarding instructions, check out PortForward.com if you don’t know how to forward ports.

The first app on this list isn’t really an Android app at all. AudioStreamer is a program that you can download to your PC to turn it into a streaming server. Once you start it up, it will sit in the background and begin listening on a port that you specify. It can be accessed through any browser using your computer’s IP address, which means you can access your music with your phone OR another computer. By default, AudioStreamer runs on port 9090.

The interface for AudioStreamer is a bit primitive but it gets the job done. In order to interact with AudioStreamer, you’ll need to provide login credentials, which is good since it prevents anyone who happens to stumble across your AudioStreamer link from tampering with your music.

All in all, AudioStreamer is a barebones app that could use a little more polish. However, if you don’t want to go through the hassle of installing a new app on your phone OR if you’re worried about accessing your music from multiple device types (e.g., phones, computers, etc.) then AudioStreamer is the one you want.

HomeDJ is the self-proclaimed replacement to AudioGalaxy, a wonderful Android app that ceased operations earlier this year. In order to use it, you’ll first need to download the HomeDJ Server application which runs on your PC. Then, you’ll need to install the HomeDJ app for Android, which creates the necessary connection to your PC for streaming the music.

There are some cool features to HomeDJ that you won’t find elsewhere: an offline cache, which allows your Android to run previously-played songs that have been cached locally; dynamic playlists, which will continuously play similar songs from within your music collection; stream quality settings, so you can reduce bandwidth requirements when you are on a weaker connection; the ability to set streaming mode for WiFi & Data or WiFi Only.

The free version of HomeDJ is ad-supported. If you want to get rid of them, you can upgrade to the pro version for $3.49 USD. HomeDJ has a great setup guide that will take you through step-by-step on how to get it running.

AirStream is the first solution on the list to include Mac computers as part of the streaming process, plus it’s more than just a music streamer. In addition to streaming high-quality songs, you can use AirStream to access and copy files on the main computer to the streaming device. Definitely a great choice if you’re looking for extra features like that.

AirStream connections are protected by requiring login credentials. In addition, the experience is made smoother thanks to the music player and file navigator built into the AirStream Android app. And for those of you who, like me, place a lot of importance on interface design, AirStream’s clean and clutter-free aesthetics will be pleasing.

SoundWire is a bit different from the other apps on this list because it doesn’t stream music, per se. In fact, it streams whatever you hear on the PC to the receiving device, which means you’ll also hear IM sounds, error popups, gaming sound effects, and whatever else is playing from your computer while it streams. This means that your PC can still use whatever music player it already uses; SoundWire will just transmit the resulting audio.

The great thing about SoundWire is that it has both high quality audio and low latency (i.e., low delay). If network bandwidth is an issue, SoundWire has acompression option that greatly reduces the stress on a network. All things considered, SoundWire can act as a remote music device, but it also works well as an extra speaker or a ranged communication device (when paired with a microphone).

Note: SoundWire’s only purpose is to stream sound from your PC. It does not manage music libraries or playlists, nor does it have the ability to skip songs, etc. Use SoundWire in conjunction with a PC music player that can be controlled remotely if you want that functionality.

Subsonic is the final app on this list and it has the benefit of being cross-platformacross the three major operating systems. In addition, it arguably has the cleanest and most stylish interface out of any of the other apps. Those two facts alone will probably be enough to convince most of you to at least try it out.

What can you expect out of Subsonic? Well, it comes with a built-in music player, which shouldn’t come as a surprise. Like HomeDJ, Subsonic also keeps an offline cache so you can play cached songs even when you don’t have an Internet connection. The stream quality will adapt based on your connection quality. And one cool feature that I like: you can use the Android app as a remote control to control the music player on the PC.

Which one do I recommend? Well, I really like AirStream for its clean interface and straightforward, intuitive design. Subsonic comes in close at second place for the same reasons; I just think AirStream is a bit more polished. Use AudioStreamer if you want to stream on any device with a browser. The other two will get the job done but they are at the bottom of my list.

Which of these will you use? Do you use a music streaming app that wasn’t mentioned here? Share your thoughts with us in the comments!

How to block Pop up Ads in your computer

How to take best photos of natures